“German business style – Be punctual, be polite, be reliable!” Read all about our mission to Berlin!

Just over a week ago, our partner (GTEC – German Tech Entrepreneurship Center) hosted the amazing Soft-Landing mission to Paris! The mission had a busy agenda of meetings and workshops with the German and Berlin ecosystem, from governmental players to VC’s and corporates that share their programs, challenges, and opportunities.

Hi, this is Mor Eini, I am happy to welcome you to the Soft-Landing mission to Berlin. On the first day we are on the 20th floor at Potsdamer Platz, right over the roofs of Berlin. 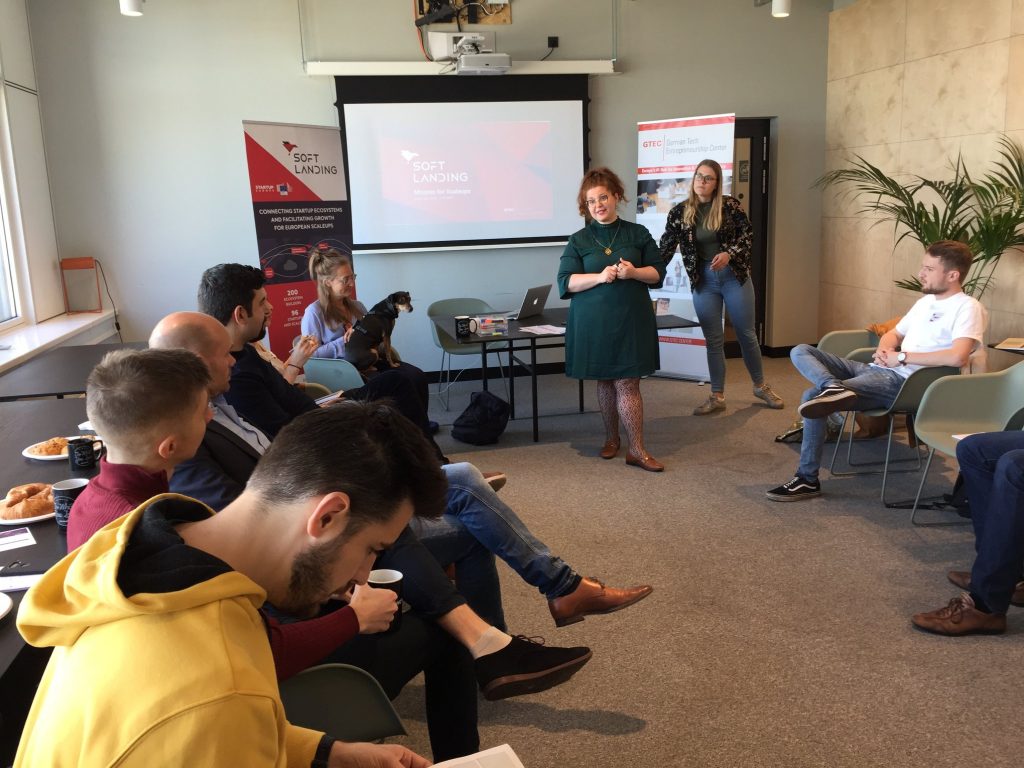 Why Berlin is not Silicon Valley

Welcomed by the GTEC Team, the delegation got an introduction to the Berlin Startup Ecosystem by GTEC’s Founding Managing Director Benjamin Rohé with a talk on ‘Why Berlin is not Silicon Valley’ sharing his insights from his life in Berlin as an entrepreneur and notes on how to live and work in this city.

Tech and innovation in Germany

For the next session Annika Schröder from the Bundesverband Deutsche Startups e.V. had a talk about Tech and Innovation in Germany.
According to her, Germany was popular for big industry and big companies with strong technology, but not for innovation. That’s where she and her company is coming into action, trying to join the Mittelstand with Startups to create tomorrow’s Mittelstand.
As many companies of the Mittelstand are family run, it’s hard for them to be open for innovation – but there is a willingness to change!
Hotspots for German startups are Berlin (international, forward thinking), Hamburg (co-working spaces etc.), Munich (old industry meets modern tech) and Stuttgart (popular for big automotive corporates).

The second part of the talk was led by Vanessa Cann, Artificial Intelligence & Future Mobility Platform Manager at the Bundesverband Deutsche Startups e.V. about the topic of A.I.. All the major corporate players in Germany just want to incorporate A.I. in their business, seeing successful models and solutions established by competitors. One thing they are struggling with is the actual implementation, though. That is where the Bundesverband Deutsche Startups e.V. taps in and tries to find solutions that makes both the startups and corporations happy, helping to identify the actual problems and solution A.I. can offer. 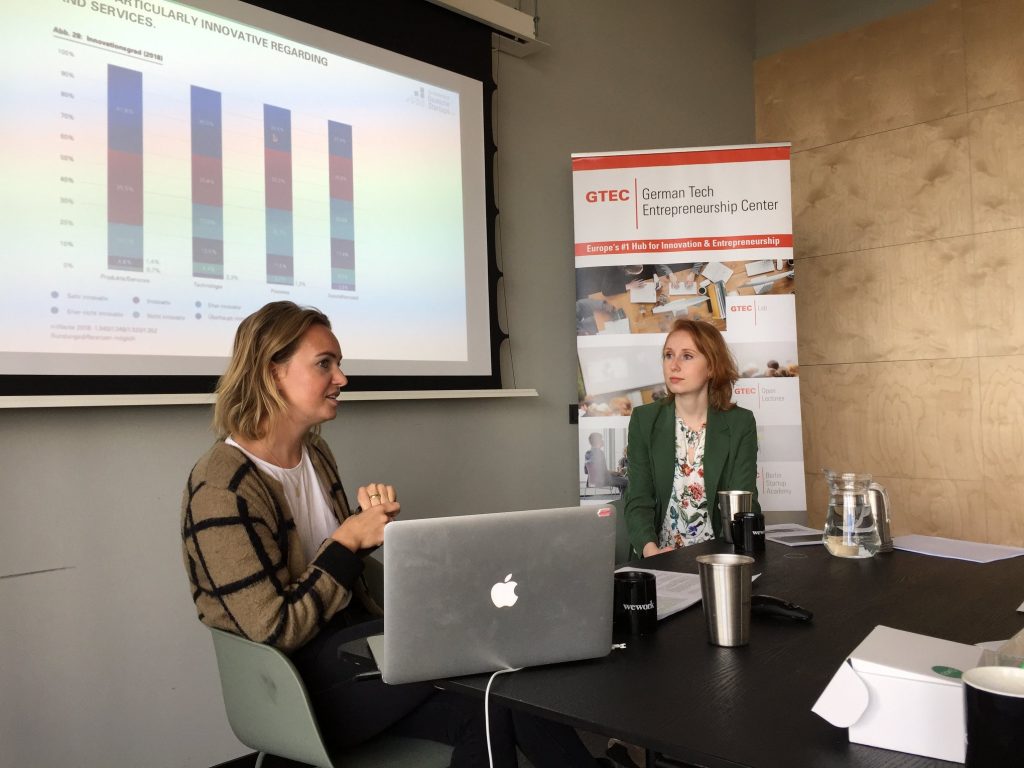 How to do business in Germany

For the next session, experienced businessman Tilo Stolzke, Founder of sananet consultants solves the big question on ‘How to do business in Germany”. Don’t start the market introduction when you are not ready yet! According to Tilo, Germany is not the best market to make super fast profit, as the US, in terms of speed, is doing better. Clients and service providers should be in one city for online businesses.

Another thing he highlighted is that for germans, the expectations on a product to be regarded as ideal, are very high. Germans want to see your whole business idea planned out to the very detail, they want to know, if your product is already sold anywhere, what are the exact aspect of the technical design, etc. It is your task as an entrepreneur to ask yourself “Is the product ready for the German market?”

To sum it up, the German Business Style is: Be punctual, be polite, be reliable. 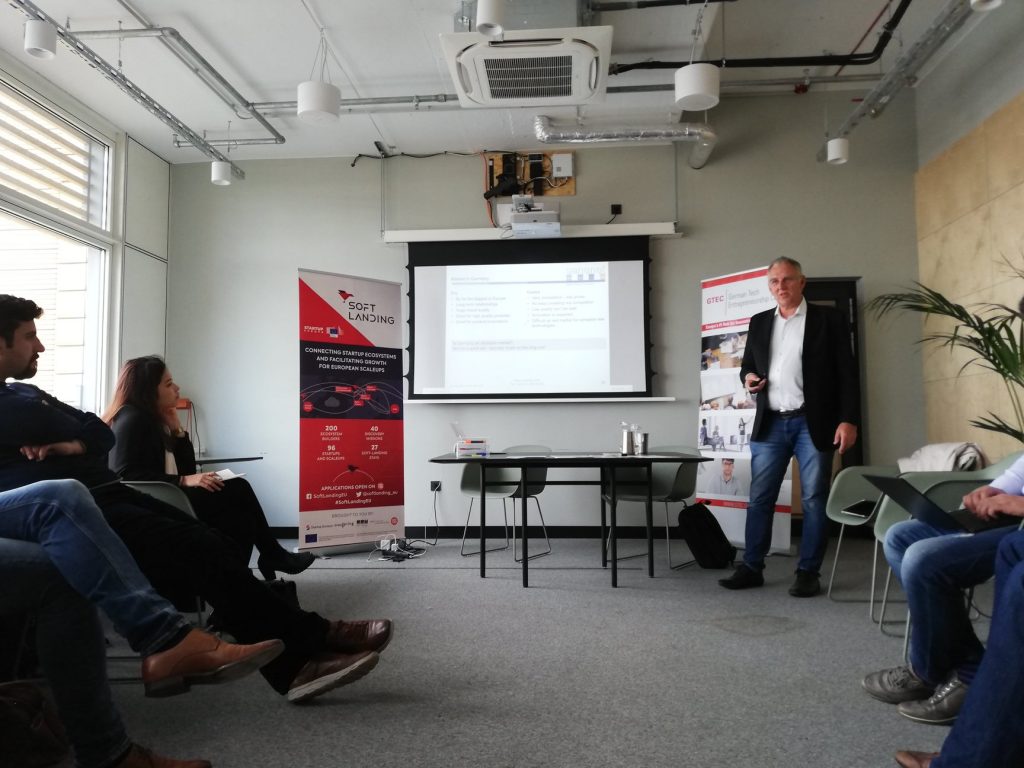 The Soft-Landing Delegation just had an EU Grant workshop with Louis Papaemmanuel, Managing Director of My EU Consulting.
Focusing on convincing with a bigger plan and investing in safe things that have potential were some of the key points he made regarding Germany.

VC standard Terms – that’s the next session for the Soft-Landing delegation in Berlin with BMH Bräutigam.
BMH Bräutigam are not the typical lawyers, but can explain the German Business mentality: be perfectly organized and flawless and the contracts finishes things up.

Also, there is a new financial method in Germany: SAFE and SAFT agreement for future equity and future tokens. In the end BMH Bräutigam shared a lot of personal experiences in the legal field of startups. Thanks to: Dr. Alexander Wulff, Bastian Reinschmidt and Dr. Patrick Auerbach-Hohl

Day no. 1 closes with G-FORCE RELOADED with Benjamin Rohe for the Soft-Landing Delegation with Mission to Berlin.
This event series by GTEC offers a unique platform for aspiring entrepreneur and interested people from the startup scene. The task is to pitch your idea in front of the live audience, as well as in front of an experienced entrepreneur.
This evening its GTEC’s Benjamin Rohé, who will listen to the pitches, also coming from our Soft-Landing delegation, and give his brutally honest feedback! 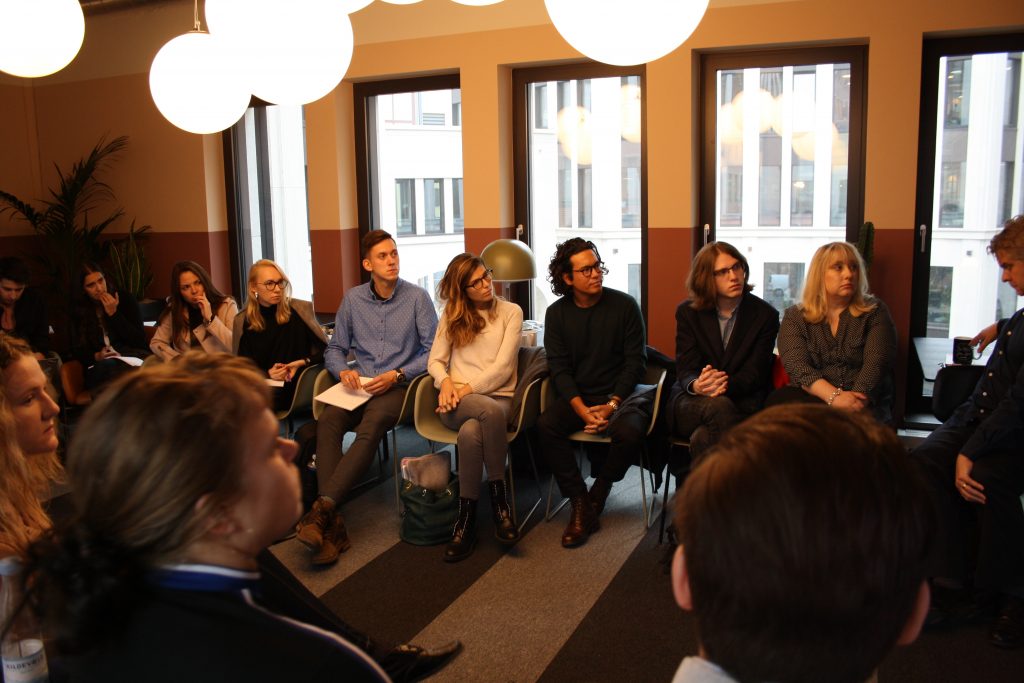 The second day for the Soft-Landing Delegation in Berlin started today at the Digital:lab – Volkswagen Ag for an exciting workshop on cooperation and the automotive industry.

Welcomed by the two Product Managers at the Digital:Lab Gal Bechor, Yonatan Chelouche and GTEC’s Michael Gröger and Mor Eini, the delegation mixed with a group of B.A. students from the המרכז הבינתחומי הרצליה – IDC HerzliyaI for the workshop revolving around the automotive industry. Divided into smaller teams, they were given the task to find the solution for the future of the automotive industry.

Part of the workshop was to quickly develop concepts for business ideas, collaborate and figure out the tricks to create a convincing product strategy and to pitch in front of the group and a jury consisting of: Hemdat Sagi, Head of Strategy and Business Development at Konnect- Volkswagen Group Innovation TLV, Timon Rupp, Founder of the Drivery GmbH, Yossi Maaravi, Vice Dean, Adelson School of Entrepreneurship at IDC Herzliya, Michael Gröger, Director Corporate Partnerships and Programs at GTEC and Jochen Scherl, Manager of the Volkswagen Digital:Lab.

For the second part of the day, the Soft-Delegation visited APX by Axel Springer and Porsche. After a quick introduction by Dr Yoni Goldwasser, Director of Venture Development at APX and Maja Markowitz, the Investment Manager at APX, explaining APX, the delegation listened to the pitches and voted their favourite from 4 startups based in the Hub!

Introduction to the Berlin ecosystem

We started the day with a very warm welcome by Carl-Philipp Wackernagel from Berlin Partner für Wirtschaft und Technologie, who gave the Soft-Landing Delegation interesting insights into Berlin’s history and the city itself.

Berlin is labeled as a startup hub, but the city never actively worked out a strategy to become one, as it was originally a city strong in the industrial sector. But Berlin today is different – it’s a city of lifestyle and trends on a fast pace, changing the face of the city with a great momentum. The city can be a good home to people working around the world and compared to the rest of Germany its economic growth is in the lead. A lot of money is invested in Startups in Berlin with the popular startup sectors being e-commerce, food, food tech and mobility. In Berlin nobody wants to know where you are from, they want to know where you are heading!

I solve your challenge!

In the next session for the Soft-Landing Delegation GTEC’s Maria Gross hosts a workshop called “I solve your challenge!”, working out problem solving strategies and lessons in teamwork!

After a whole day packed with meetings, informations and presentations, the Soft-Landing delegation visited the Brandenburg Gate and went to the Hofbräuhaus at Berlin’s Alexanderplatz to eat and drink the traditional German way afterwards. Everyone had a nice chat with each other while drinking beer and eating Schnitzel.

On day no. 4 the Soft-Landing Delegation with Mission to Berlin started with a workshop on ‘Strategic Networking for Startups’ led by Max Postnikov, who is an angel investor and tech entrepreneur himself.

Being Co-Founder of Baltic Sandbox, an accelerator operating in the Baltics, Max shared his knowledge with the Soft-Landing Delegation.

Matus Steis, CFO at Rockaway Blockchain and from Rockaway Capital gave his insights on the 4. Day for the Soft-Landing Delegation into the VC Ecosystem in Berlin. He introduced the Delegation to the VC Rockaway Capital, for which he is the Chief Financial Officer, also talking about his experience working in a VC. 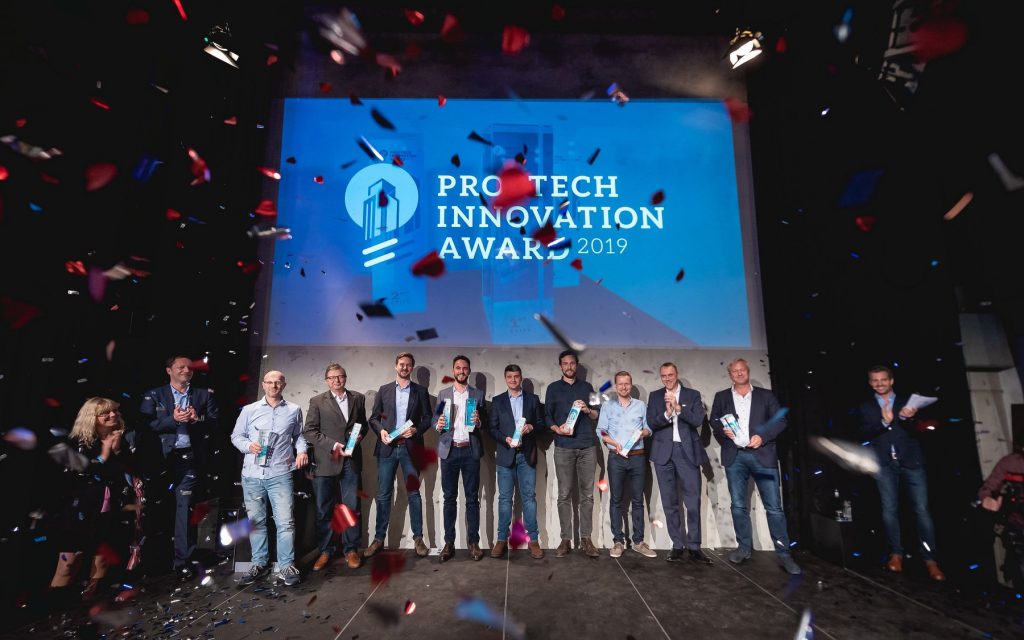 Innovation Amazon Style – that was the theme for our entrepreneur Breakfast this morning, for which Antoine Brochet from Amazon Web Services (AWS) provided a detailed talk about Amazon’s culture of Innovation.
Key is to learn from failure – to take up all the knowledge a mistake provides you.

Everyone has to focus on customer behaviour and the needs of their individual customer, as the product stays in the background.

Spotlight session: my experience as an entrepreneur in Germany

The last session was about sharing experience. “My experience as an entrepreneur” with GTEC NO BULLSHIT LAB Startups Cogatech, deepset and SourcingBot. The complexity of Germany and it’s economics and inside advice was shared in this last session.

After 5 days it was time to say goodbye, hopefully not for too long!

For the startups: We hope you see Berlin and Germany as your next market!
For the ecosystem leaders: We encourage you to build joint ventures with the different communities and people you met and have fruitful collaborations.

Do you want to join us one of our next missions?

Sign up to our mailing list at the bottom of the homepage, to be the first to find out about our next missions (which, at the time of this article, are to New York and Silicon Valley!)